What Size Should Your Swim Spa Be? 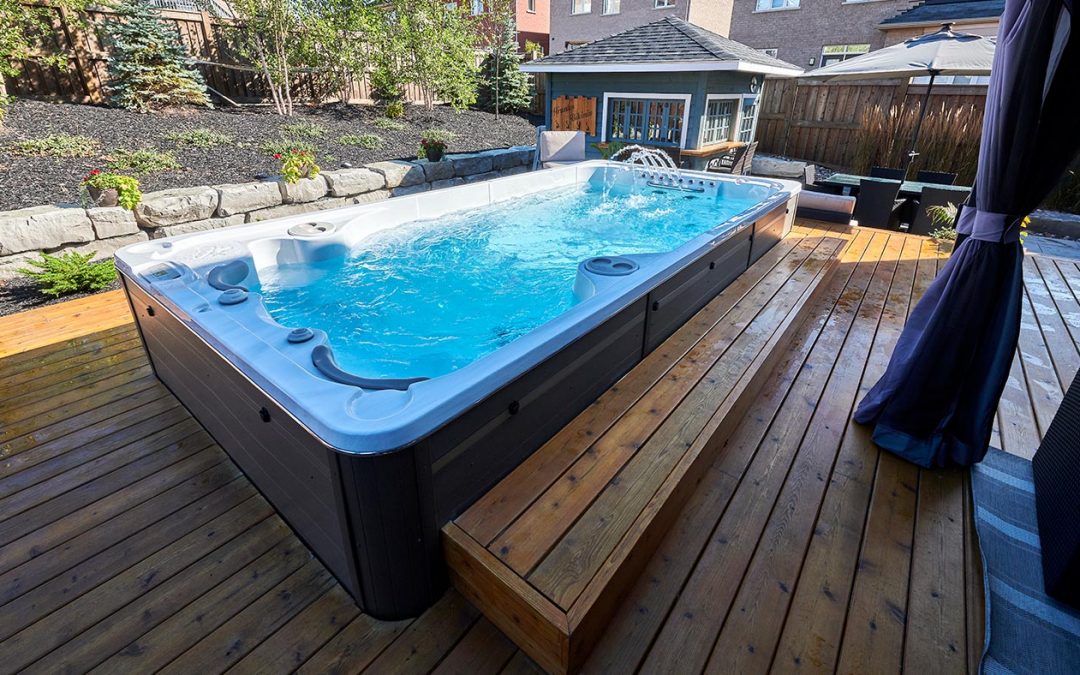 One of the most basic questions that you will have to answer when buying a swim spa is what size it should be. For many first time swim spa buyers, this can also be one of the hardest questions to answer. Today, we will help you choose which size of swim spa is right for you and your family. But first, how big are swim spas anyway?

How Big Are Swim Spas?

Most swim spas currently on the market are around 8′ wide and come in a variety of lengths; typically anywhere from 12′-21′. Different swim spas use this available space in different ways, however, with some swim spas having larger swim areas and others having more space dedicated to massage therapy seats.

How Big Should Your Swim Spa Be?

When determining what size your swim spa should be there are a few questions you should ask yourself. These are:

How Big Is Your Space?

How Many People Will Be Using The Swim Spa?

Once you know how much space you have to work with, it’s time to figure out how much space you’ll need. To do that simply add up the number of people that will be using the swim spa at a given time. If the answer is just 1 or 2, you can pretty much buy any size of swim spa you like. In the interest of saving money, a 12′-14′ swim spa would probably be the best place to start. Any larger and you might just be spending money for more area that don’t really need.

If, on the other hand, you have a couple of young kids that will regularly have friends over for pool parties, you should look for a larger swim spa. More accurately, you should look for a swim spa that has a large swimming area. As we said earlier, different swim spas utilize their available space differently. The 17AX from Hydropool Swim Spas, for example, has a swimming area bigger than most 19′ swim spas!

How Tall Are The People That Will Be Using The Swim Spa?

If one or more people using the swim spa are quite tall (over 6′ 2″) you might want to consider buying a slightly larger swim spa than you otherwise would. This is because a 12′ or 14′ swim spa simply won’t have a long enough swim tank for them to comfortably swim in. Upsizing to a 16′ or 17′ swim spa will allow them to swim comfortably without fear of hitting their feet or ankles off the seats or steps at the back end of the pool.

How Will You Be Using The Swim Spa?

When it comes to picking out the right swim spa for your family, one of the biggest factors to consider is how you and your family will actually use the swim spa. For simplicity sake, we will split these potential usages into three categories; relaxation, a pool for kids and fitness.

If you’re looking to use the swim spa as a simple splash pool to relax in, the size of the swim tank is likely going to be less important than the space dedicated to therapy as well as the number of therapy seats. Simply put, you’re going to want to make sure that there are enough therapy seats for everyone that will be using the swim spa at a given time.

If you will be using the swim spa primarily as a pool for your kids then you will want to ensure that the swim tank is big enough to accommodate them and any of their friends that they might want to have over.

If you will be using the swim spa for fitness and swimming against the current, you will want to make sure that the swim tank is big enough for you to comfortably swim in. If you’re around 6′ tall or less, a 14′ swim spa will likely be just fine. If you’re taller than 6′ you will likely want to consider going up to a 16′ or 17′ model.

Will You Be Using The Swim Spa Year Round?

Another factor that might affect the size of your new swim spa is if you’re planning on using it year round, or just in the warmer months.

One of the major advantages that swim spas have over traditional pools is that they can be used even when the outside temperatures dip below freezing. While all swim spas can be used year round, their running costs do increase as the temperatures decrease. Buying a slightly smaller swim spa will mean less water to heat and a smaller increase in these costs.

That said, if a smaller swim spa isn’t an option, you can also simply look for a swim spa that is more energy efficient. Hydropool’s Self Cleaning swim spas, for example, feature an extra layer of insulation and ultra-efficient filtration system that together greatly reduce the running costs of the swim spa, especially in the colder months.

What Is The Best Size For Your Swim Spa?

Swim spas in the 12′-14′ range are best if you’re only planning on having 1-2 people use the swim spa at a given time, or if you simply don’t have the space for a larger swim spa. They should be avoided if you will regularly have 4 or more people using the swim spa or if you’re a person over 6′ tall and are planning on regularly swimming against the current.

Swim spas in the 16′-17′ range are good all-round swim spas that can be used for fitness, swimming and simple relaxation. They are best for taller people looking to swim against the current, or if you plan on having 4 or more people using the swim spa at a given time.

Swim spas that are 19′ or larger generally have the same sized swim tanks as 17′ swim spas but have a larger area dedicated to massage therapy seats. They’re best if you plan on having 4 or more people using it at the same time and everyone will want a therapy seat.

Some swim spa manufacturers offer “dual temp” swim spas. These are swim spas where the swimming end and the therapy ends are separated. This allows you to set both to different temperatures and even close one while keeping the other one working.

Read More: Hydropool vs Coast vs Arctic; Which Swim Spa Brand Is Best?