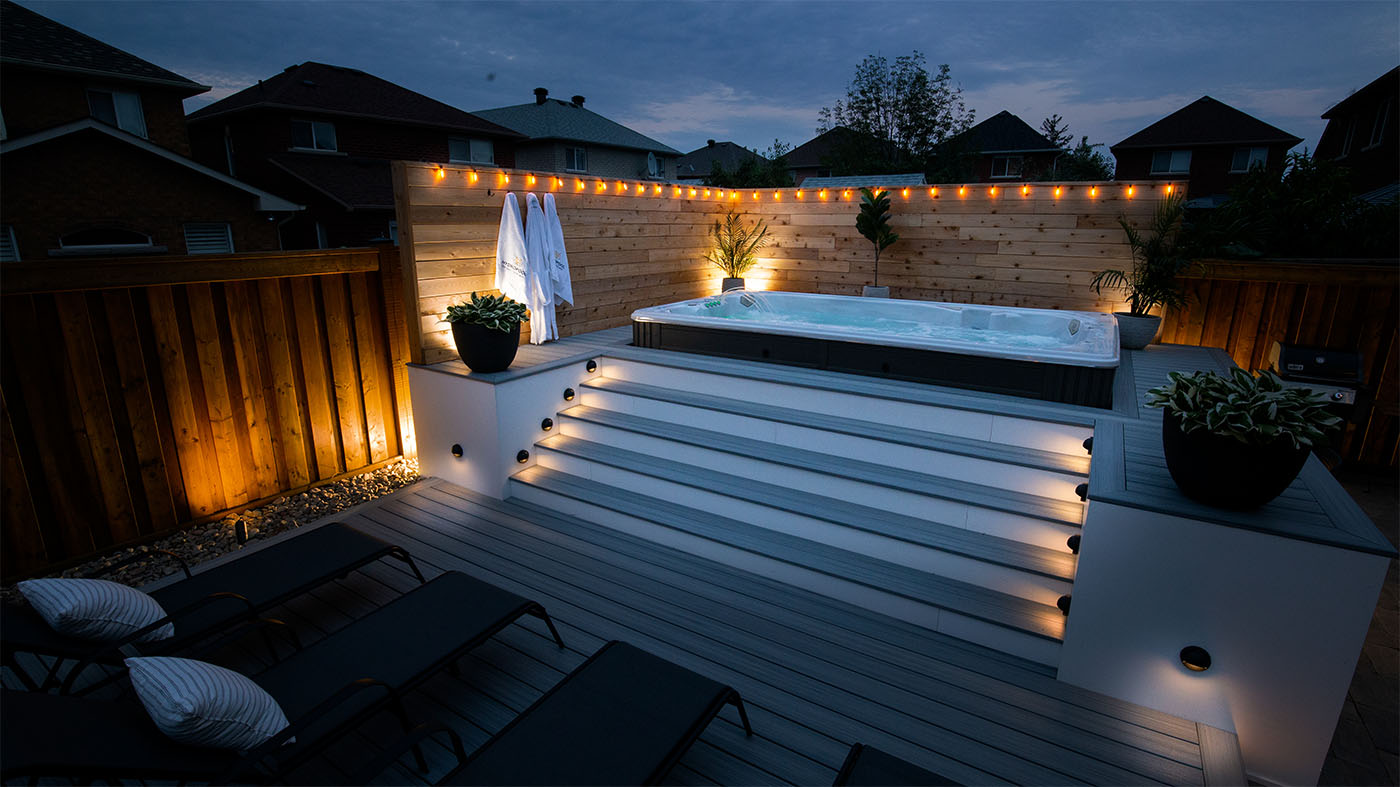 When deciding between a pool and a swim spa, cost can be a major factor. So how much do swim spas cost and, more importantly, how do these costs compare with above ground or in-ground pools? Today we will look at what swim spas cost to purchase and maintain, while also looking at how those costs compare to the more “traditional” pools.

Most swim spas sold in Canada will set you back anywhere from $15,000 to $55,000. As you can imagine, there is quite a difference between a $15,000 swim spa and a $55,000 swim spa. To help simplify these differences, we’ve broken down this range into three categories.

For the most part, swim spas costing between $15,000 and $25,000 are considered lower-end swim spas. These swim spas are usually designed and built with the primary goal of keeping costs low. Most are built overseas using the cheapest materials available. Rather than using jets and pumps specially designed for use in swim spas, they often use generic parts most commonly found in cheap hot tubs, leading to a very underwhelming swim and lackluster massage experience.

To keep costs down, these swim spas are also usually built with cheaper, less energy efficient pumps and heaters. This means that lower-end swim spas will typically have to run for longer to keep the water clean and properly heated; leading to higher maintenance costs.

Most swim spas found in Canada fall into the mid-range category; costing between $25,000-$40,000. These swim spas are usually made in North America, have a higher overall build quality, and come with a more robust warranty. Most mid-range swim spas are also built with equipment that has been specifically designed for use in swim spas. Parts like pumps, swim jets and current diverters are made specifically to handle the higher flow rates needed to produce a top quality swim current. For this reason, they deliver a much better swimming experience than the repurposed hot tub parts used in lower-end swim spas.

Other Swim Spa Costs To Consider

When discussing the overall cost of owning a swim spa the purchase price is only one part of the equation. To understand the total cost of a swim spa you will also need to consider both its installation costs and its ongoing costs.

Swim spa installation costs can vary quite a bit depending on how you plan on installing it. Installing your swim spa on a concrete pad next to an existing deck, for example, is much more cost-effective than sinking it into the ground and building a patio around it.

A simple poured concrete pad for a swim spa will generally cost you around $5000-$8000. On top of that you will also want to budget around $2000-$2500 to cover the electrical hookup costs. Electrical costs can increase if you need to upgrade your panel to accommodate the swim spa, or if you have a particularly long cable run between your panel and the swim spa.

More complex swim spa installations are harder to ballpark as each situation is different. No matter how you’re planning on installing the swim spa, however, you will need to make sure that you account for the concrete pad and electrical install.

While you can never know exactly how much a given swim spa will cost you to run and maintain, there are a few things you can look for to help minimize these costs:

How Do Swim Spa Costs Compare With The Cost Of Other Pools?

Now that we’ve covered the costs of purchasing, installing and owning a swim spa; how do these costs compare with more traditional above ground and in-ground pools?

Due to their smaller size, smaller pumps and insulation, the running costs of swim spas are also much lower than both above ground and in-ground pools. In fact, most quality swim spas are able to run, filter and heat themselves for less than the running cost of a standard pool pump! Combine this with their longer swimming season, massage therapy seats and variable swim currents, it’s no wonder why swim spas have skyrocketed in popularity in the last few years!

Swim spas are an increasingly popular alternative to traditional above ground or inground pools. Not only do they allow you to swim year-round, they also have soothing massage therapy seats and swim current systems. Their overall costs also compare quite favourably with both above ground and in-ground pools.