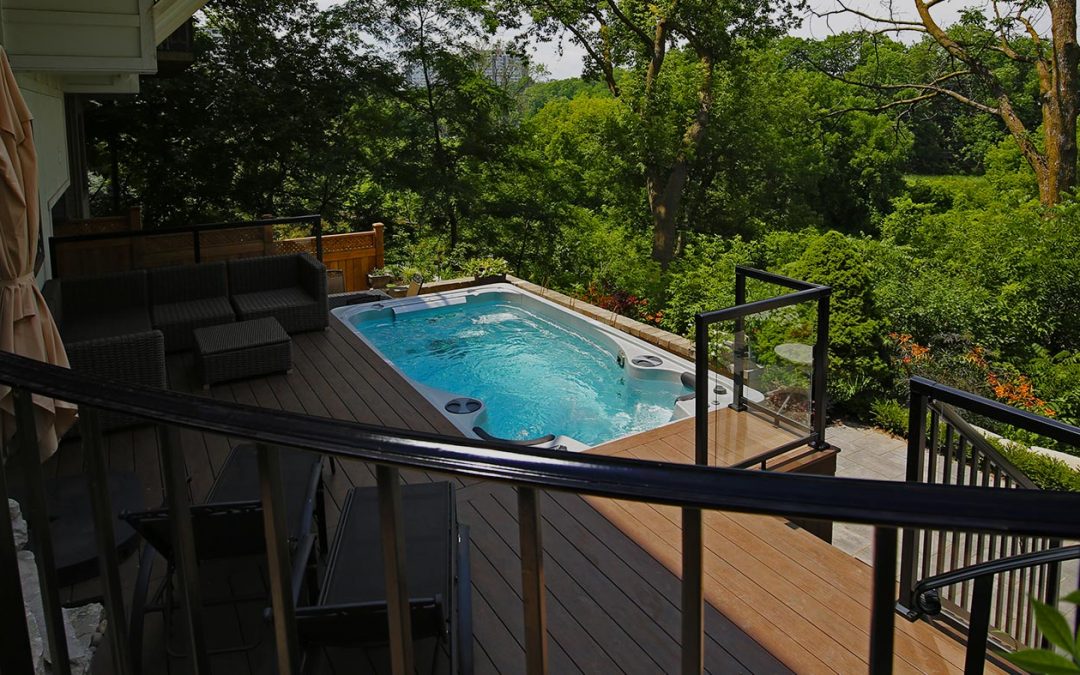 For most people, swim spas are still a relatively new concept. For that reason, most people have no idea what a swim spa really costs. Today, we will look at how much a swim spa will cost you in Canada, and discuss some additional costs that you will need to consider. But first, let’s talk purchase price.

For the most part, swim spas costing between $10,000 and $20,000 are built with cost rather than quality in mind. Most are built overseas using the cheapest materials available to keep costs low. Rather than using jets and pumps designed for use in swim spas, most instead just use parts most commonly found in cheap hot tubs, leading to a very underwhelming swimming experience.

Their filtration systems are also made for hot tubs and are not designed to efficiently clean the amount of water found in a swim spa. This leads to cloudy water and high energy bills as the filtration system has to work around the clock to clean the water.

Most swim spas found in Canada fall into the mid-range category; costing between $20,000-$35,000. These swim spas are usually made in North America (making parts easier and cheaper to source) and come with a more robust warranty. Most mid-range swim spas are also built with more equipment that is designed for swim spas. Parts like pumps, swim jets and current diverters are made specifically with swimming in mind and deliver a much better experience than low-end swim spas that only use hot tub parts.

Although better than low-end swim spas, many mid-range swim spa swim currents still lack power and smoothness. To overcome this, the manufacturer will often include a swim tether system to keep you in place and prevent you from out-swimming the current.

High-end swim spas are also generally larger than mid-range swim spas and include added hydrotherapy and fitness options that aren’t found in other swim spas. Some also offer dual-temperature control where you can set one side of the swim spa to a comfortable swimming temperature and the other side to a temperature more suited to hydrotherapy.

Note: With the exception of Hydropool’s Self-Cleaning swim spas, almost all mid-range and high-end swim spas still utilize hot tub filtration systems, despite using other specialized swim spas parts such as pumps and jets. Although these systems do work, they are very inefficient and increase both energy costs and the amount of maintenance needed to keep the water clear.

OTHER COSTS TO CONSIDER

These costs can vary quite a bit depending on how you plan on installing your new swim spa. For example, installing your swim spa on a concrete pad next to your house is much more cost-effective than sinking it into the ground in the middle of your backyard and building a patio around it.

As a general rule if you’re planning on a simple above ground swim spa install on top of a concrete pad, you should budget around $3000-$5000 for your installation. This budget will cover the concrete pad as well as the electrical installation. $3000 will cover a smaller pad for a 12′-14′ swim spa that is installed close to the home’s main electrical panel, while $5000 should cover most installs where the concrete pad is larger and the electrician needs to run more wire to reach the swim spa from the main electrical panel.

More complex swim spa installations are harder to ballpark as each situation is different. No matter how you’re planning on installing the swim spa, however, you will need to make sure that you account for the concrete pad and electrical install.

While you can never know exactly how much a given swim spa will cost you to run and maintain, there are a few things you can look for to help minimize these costs:

HOW CAN YOU SAVE MONEY ON YOUR SWIM SPA?

So now that you have a better idea of what a swim spa costs, the question becomes how can you lower these costs. For some great tips on how to get the best price on the hot tub that will best suit your families needs, see our swim spa buying tips. Want some more info on swim spas, including common buying mistakes that you should avoid? Download our free swim spa buyer’s guide.